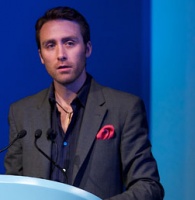 Philippe Cousteau , Jr - Explorer, Social Entrepreneur and Environmental Advocate Philippe Cousteau is the 31-year-old son of Jan and Philippe Cousteau Sr., and the grandson of Captain Jacques-Yves Cousteau. As a member of the legendary family, Philippe is continuing the work of his father through EarthEcho International (www.earthecho.org), the non-profit organisation he founded with his sister and mother and of which he serves as President. His goal is to engage and empower people to take action for a brighter future. His tools are simple—education, balanced advocacy and a commitment to action.

In addition to his work with EarthEcho International, Philippe is co-founder of Azure Worldwide (www.azureworldwide.com), a strategic environmental design, development and marketing company. Projects include work in green site design/planning, eco-tourism and new media. Through an alliance with the University of Virginia, where he is an OpenGrounds Fellow, Philippe is aiding in the development and promotion of a revolutionary interactive game that simulates the impact of individuals and communities on the health of critical water resources.

Leveraging the skills and experiences of his non-profit and corporate platforms, Philippe and his multi- disciplinary team recently announced a partnership with the U.S. Department of State to design and operate the USA Pavilion experience at Expo 2012 in Yeosu Korea (www.pavilion2012.org).

Philippe has partnered with Advisor Shares Investments to launch the Global Echo Exchange Traded Fund on the New York Stock Exchange (NYSE: GIVE) as well as the formation of Global Echo Foundation, a 501 (c)(3) of which he serves as Co-founder and Chairman. The Global Echo Foundation will provide resources to solve many of the challenges facing the world community from social issues impacting women and children to environmental conservation, as well as supporting social entrepreneurship.

Philippe is a special correspondent for CNN International where he is the host of the Going Green series and reports on environmental and humanitarian stories including an exploration of the extreme science of climate change deep in the frozen arctic. Philippe hosted Oceans Blue, a High Definition Discovery networks/BBC series which premiered in the U.S. on Planet Green in August 2010. In addition, he is the Chief Spokesperson for Environmental Education for Discovery Education, the #1 provider of K–12 broadband-delivered educational content to U.S. schools and lectures to over 100,000 K-12 students a year. Philippe is also the co-author, with Cathryn Berger Kaye, of Going Blue, A Teen Guide to Saving Our Oceans, Lakes, Rivers, & Wetlands (Free Spirit Publishing), which was released in the summer of 2010 and has been awarded Learning Magazine’s 2011 Teachers’ Choice Award for the Family, a Gold Nautilus Award and a 2010 ForeWord Reviews Book of the Year Gold Award, amongst others.

Philippe has been featured in television, online, radio and is a regular speaker at conferences around the world. He has written articles for many publications including Sport Diver Magazine and National Geographic Magazine and has lectured at such institutions as The United Nations, Harvard University, and Woods Hole Oceanographic Institution and for companies such as Google, Intel, Tyco, and more. He is a frequent contributor to CNN.com, the Huffington Post and TreeHugger.com.

Philippe and his sister Alexandra were named to Vanity Fair magazine’s 2010 Next Establishment list in recognition of their contributions as environmental advocates.

Philippe serves on the Board of Directors of The Ocean Conservancy, Marine Conservation Biology Institute, and the National Environmental Education Foundation, and the National Council of the World Wildlife Fund. Philippe has also testified to Congress on issues of ocean management and off-shore drilling. Most recently, he was appointed founder and co-chair of the Gulf Action Network for the Clinton Global Initiative.

Philippe's travels have taken him diving, rock climbing, trekking, and snowboarding around the world. From expeditions in the highlands of Papua New Guinea to war-torn Sarajevo, where he provided humanitarian aid, he has learned that exploring the connections between humans and the environment are as important as exploring nature itself. He holds a Master’s degree in history from the University of St. Andrews.