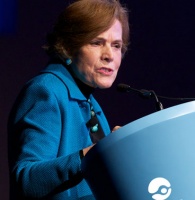 Sylvia A. Earle (born 1935) is a leading American oceanographer and former chief scientist. Earle is a devout advocate of public education regarding the importance of the oceans as an essential environmental habitat.

Sylvia A. Earle is a former chief scientist of the National Oceanic and Atmospheric Administration (NOAA) and a leading American oceanographer. She was among the first underwater explorers to make use of modern self-contained underwater breathing apparatus (SCUBA) gear, and identified many new species of marine life. With her former husband, Graham Hawkes, Earle designed and built a submersible craft that could dive to unprecedented depths of 3,000 feet.

Sylvia Alice (Reade) Earle was born in Gibbstown, New Jersey on August 30, 1935, the daughter of Lewis Reade and Alice Freas (Richie) Earle. Both parents had an affinity for the outdoors and encouraged her love of nature after the family moved to the west coast of Florida. As Earle explained to Scientific American, "I wasn't shown frogs with the attitude 'yuk,' but rather my mother would show my brothers and me how beautiful they are and how fascinating it was to look at their gorgeous golden eyes." However, Earle pointed out, while her parents totally supported her interest in biology, they also wanted her to get her teaching credentials and learn to type, "just in case."

She enrolled at Florida State University and received her Bachelor of Science degree in the spring of 1955. That fall she entered the graduate programme at Duke University and obtained her master's degree in botany the following year. The Gulf of Mexico became a natural laboratory for Earle's work. Her master's dissertation, a detailed study of algae in the Gulf, is a project she still follows. She has collected more than 20,000 samples. "When I began making collections in the Gulf, it was a very different body of water than it is now - the habitats have changed. So I have a very interesting baseline," she noted in Scientific American.

In 1966, Earle received her Ph.D. from Duke University and immediately accepted a position as resident director of the Cape Haze Marine Laboratories in Sarasota, Florida. The following year, she moved to Massachusetts to accept dual roles as research scholar at the Radcliffe Institute and research fellow at the Farlow Herbarium, Harvard University, where she was named researcher in 1975. Earle moved to San Francisco in 1976 to become a research biologist at and curator of the California Academy of Sciences. That same year, she also was named a fellow in botany at the Natural History Museum, University of California, Berkeley.

Although her academic career could have kept her totally involved, her first love was the sea and the life within it. In 1970, Earle and four other oceanographers lived in an underwater chamber for fourteen days as part of the government-funded Tektite II Project, designed to study undersea habitats. Fortunately, technology played a major role in Earle's future. A self-contained underwater breathing apparatus had been developed in part by Jacques Cousteau as recently as 1943, and refined during the time Earle was involved in her scholarly research. SCUBA equipment was not only a boon to recreational divers, but it also dramatically changed the study of marine biology. Earle was one of the first researchers to don a mask and oxygen tank and observe the various forms of plant and animal habitats beneath the sea, identifying many new species of each. She called her discovery of undersea dunes off the Bahama Islands "a simple Lewis and Clark kind of observation." But, she said in Scientific American, "the presence of dunes was a significant insight into the formation of the area."

Though Earle set the unbelievable record of freely diving to a depth of 1,250 feet, there were serious depth limitations to SCUBA diving. To study deep-sea marine life would require the assistance of a submersible craft that could dive far deeper. Earle and her former husband, British-born engineer Graham Hawkes, founded Deep Ocean Technology, Inc., and Deep Ocean Engineering, Inc., in 1981, to design and build submersibles. Using a paper napkin, Earle and Hawkes rough-sketched the design for a submersible they called Deep Rover, which would serve as a viable tool for biologists. "In those days we were dreaming of going to thirty-five thousand feet," she told Discover magazine. "The idea has always been that scientists couldn't be trusted to drive a submersible by themselves because they'd get so involved in their work they'd run into things." Deep Rover was built and continues to operate as a mid-water machine in ocean depths ranging 3,000 feet.

In 1990, Earle was named the first woman to serve as chief scientist at the National Oceanic and Atmospheric Administration (NOAA), the agency that conducts underwater research, manages fisheries, and monitors marine spills. She left the position after eighteen months because she felt that she could accomplish more working independently of the government.

Earle, who has logged more than 6,000 hours under water, is the first to decry America's lack of research money being spent on deep-sea studies, noting that of the world's five deep-sea manned submersibles (those capable of diving to 20,000 feet or more), the U.S. has only one, the Sea Cliff. "That's like having one jeep for all of North America," she said in Scientific American. In 1993, Earle worked with a team of Japanese scientists to develop the equipment to send first a remote, then a manned submersible to 36,000 feet. "They have money from their government," she told Scientific American. "They do what we do not: they really make a substantial commitment to ocean technology and science." Earle also plans to lead the $10 million deep ocean engineering project, Ocean Everest, that would take her to a similar depth.

In addition to publishing numerous scientific papers on marine life, Earle is a devout advocate of public education regarding the importance of the oceans as an essential environmental habitat. She is currently the president and chief executive officer of Deep Ocean Technology and Deep Ocean Engineering in Oakland, California, as well as the coauthor of Exploring the Deep Frontier: The Adventure of Man in the Sea and sole author of Sea Change: A Message of the Ocean, published in 1995.